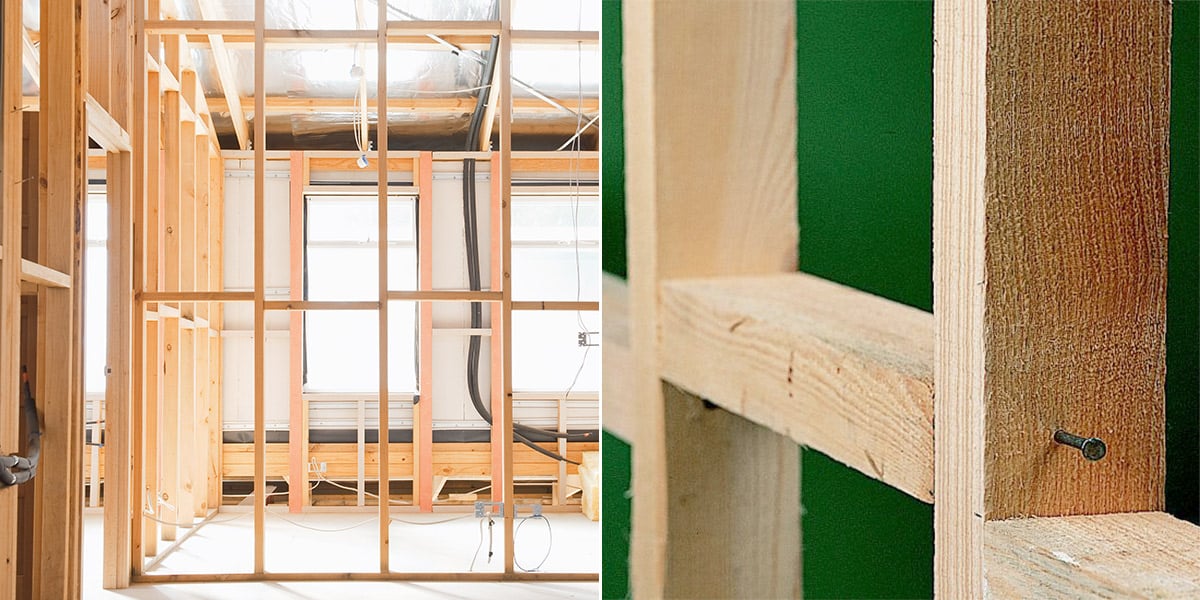 What is a Stud Finder?

Let’s break it down.

You have your wall, most likely sheets of drywall, and behind that are the studs. The studs are the structure that your drywall is attached to and is usually comprised of lengths of 2”x4”. This is basically a frame that the drywall is screwed into before it is taped and mudded to create a seamless finish.

The studs run vertically, from floor to ceiling, and, as you may have guessed it, a stud finder is used to find the position of these studs.

Why is it Important to Find Studs in Walls?

So, you want to hang something on your wall.

For light items, say a sheet of paper, you can use tape, tack, or even put a small nail in the wall, but you have to be careful when you are hanging heavier items.

If you try to hang something like a mirror and put a nail anywhere, it is going to be unstable because there is only a thin layer of drywall holding the nail, and drywall is a brittle material. What you need is a stud.

If you can hammer the nail through to the wooden stud behind, it is going to create a solid fastener that can hold a lot of weight. This also goes for screws and any other fastener that you can drive into a wall.

By finding a stud, you can hold heavy items, hundreds of pounds if necessary, compared to a pound or two with only drywall.

How Does a Stud Finder Work?

If you want to go old-school, you can use a magnet, and this is how models of stud finder still work. If you place a magnet against your wall and move it around, you should be able to sense when it passes over a nail or a screw (if the magnet is powerful enough), and that will tell you where the drywall is attached to the stud, and where the stud is.

The problem with this method is that it is slow and is not always reliable.

Modern stud finders use changes in capacitance to locate studs. The stud finder will sense the change in dielectric constant when the stud finder moves from drywall to drywall with a stud behind it. The sensor and circuity will record this change and display the information for you.

Modern stud finders are extremely accurate, easy to use, and quick.

How to Use a Stud Finder

The first thing to do is to check the type of stud finder that you bought. We recommend stud finders that work with density rather than the magnetic type.

This short instructional guide will deal with density stud finders but works equally well for magnetic stud finders too. Before we get into that, though, read through the instruction manual that came with your stud finder.

Decide where you want to hang your item, and remove anything from the area that could affect the reading, especially if you are using a magnetic stud finder.

Make sure that your stud finder has power and is switched on. Check to see which side you are going to be placing against the wall, usually the side with soft contacts to protect the wall from scratches.

Studs are generally spaced 16 or 24 inches apart, so be prepared to check 12 inches of wall in either direction to ensure that you find the stud. Hold the stud finder against the wall and press the button to calibrate the stud finder (you will find information about how to do this in your instruction manual.

The stud finder will alert you when a stud is found via a beeping noise or a flashing light (maybe both). Move the stud finder slowly to pinpoint the exact place where the stud is located.

Use a pencil to mark where the stud is. A density stud finder will show you where each edge of the stud is, and you should mark each edge so that you can drill or hammer in the exact center of the stud.

To ensure accuracy, repeat the process again to check for the location of the stud and check that were are studs on either side of the one that you marked, at a distance or 16/24 inches.

Congratulate yourself on a job well done.

We have talked about density and magnetic stud finders, and those are two ways that studs can be found, but there is a range of stud finders, some that use those methods and some that do not. Let’s take a look.

The most common type of stud finder. They are accurate, have simple displays, and are easy to use. The only downside is the reliance on batteries.

Instead of finding the sides of the stud one at a time, this type of stud finder will locate the entire stud in one go.

These stud finders will locate the center of the stud for you without you having to work that out based on the edges.

Wider than other stud finders, you place this device against the wall, and it will locate the stud, and anything else, without you having to move it around.

The sensor will scan deep and will also alert you to other hidden objects located in your wall, giving you the width and position so that you know where not to drill.

An accurate device that will help to find all your studs.

With a simple and intuitive design and clear display, this stud finder can scan for wood, metal, wires, and other embedded objects. It can also detect copper, aluminum, rebar, and more, making it a safe choice if you are unsure what is behind your wall.

The LED screen gives you all the information that you need, telling you where the center of the stud is, and the automatic calibration saves you valuable time.

Easy to use and handy for more than just studs.

Stud Finder App – Does it Work?

There are many apps out there that claim to be able to locate studs with your phone and, the truth is, they actually do work.

Having said that, they only work on newer phones, and you need to have the latest software. Also, they are not as accurate as stud finders, so you may find yourself drilling into fresh air. They can work in a pinch, but you should not rely on them.

How to Find a Stud Without a Stud Finder

There are three main approaches to finding a stud without a finder.

Studs are most commonly placed 16” apart. With this knowledge, you can measure from the end of a wall and hope that you hit a stud. You can also measure from where you know there is a stud or, you can use windows, outlets, and switches as a guide. These will almost always be attached to a stud, at least on one side. Find an outlet, and pick a side. If you find a stud, you can use it or measure from it.

If you have a magnet, run it over the wall and hope that it picks up on some metal. This may not work if the magnet is not powerful enough, so go big or go home.

Pick a spot on the wall, and drill into it. If you don’t hit a stud, move an inch horizontally and try again. We don’t recommend this method as you might drill into something that you shouldn’t, and it is going to leave your wall with lots of holes.

Not much to say here. Use a pencil so that you can remove it later, mark each side of the stud, mark the middle of the stud, drill your hole, and then erase the pencil marks.

Tips and Tricks of Finding Studs

You’ve made it this far, so you are invested in finding a stud. Here are some tips and tricks to make stud finding easy.

Note: ComproGear is reader supported. When you buy through links on our site, we may earn a commission at no extra cost to you. This does not affect our editorial independence. Learn more.